There is an organization called Matsushiro Earthquake Center in Matsushiro, Nagano Prefecture in Japan. The Center was established in February 1967 at the Japan Meteorological Agency in Matsushiro Town, Nagano Prefecture (now Nagano City) based on the Matsushiro Seismological Observatory which was established in 1947. The background of this establishment is that between August 3, 1965, and April 17, 1966, insensitive earthquakes, seismic intensities 5 and 4 were observed three times each and a total of 6,780 earthquakes were detected in the Matsushiro town area. This severe earthquake activity has become a major social problem.

It is famous that Mayor Nakamura at that time said that he wanted to learn and research more than things and money, and that was a starting point of the center. The center is also well known as the location which was planned to build the imperial general headquarter at the end of the second world war. Besides, It is known that the experience gained from the observation of the earthquake has dramatically influenced the progress of earthquake prediction and disaster countermeasures today.

The author is organizing the records of the discourse at the time with the cooperation of the Japan Meteorological Agency’s Earthquake Observatory (Matsushiro Seismological Observatory) as the Disaster Information Office. I am surprised at the fascinating records. The fact that Matsushiro city was working to build a disaster-resilient town in the wake of an earthquake throughout the city is lively communicated. For example, there was not only research on the earthquake itself but also research on the health status of students, including psychological aspects from nearby schools caused by a swarm. This was due to the cooperation of Matsushiro health centers and hospitals. It does not stop there. Members were active in the front lines of various fields at the time, such as landslide surveys caused by earthquakes and the impact on water supply facilities during earthquakes, reports from various perspectives.

I am sorry that the format etc. is still insufficient, but I am starting to release these records on the HP in hopes that you can see it in a provisional form. Please see if you have time.

Now you can not access, but you can ask NIED DIL to have information.

■ Disaster Recoveries ■
Global attention is being focused on how recovery will take place after the Haiti earthquake. I have studied a lot about disaster recovery. Still, as a valid theory of thinking, a researcher named Haas says, “A rapidly growing city will recover quickly after the disaster but will remain unchanged and stagnant or downhill cities will recover very slowly after the disaster or will quickly decline “(1977). When considering what kind of area or a growing city or not is in this case, the population before the disaster could be examined as an indicator. I’ve researched a lot and predict that no matter how massive the distraction maybe, an area with a growing population may be easier to recover. For example, in the city of Nagoya, due to the Typhoon Ise Bay disaster, the scale of economic and social damages were plentiful, and the amount of aid was small, but it was said that it was revived in less than a year. In comparison, the scale of economic and social disasters in New Orleans due to the Hurricane Katrina disaster was not so large relatively as statistics, but the amount of aid was enormous. Nevertheless, it may be useful to say that five years have passed and that recovery has not yet been well. New Orleans was even expressed to be a surviving city, even before the disaster. Regarding the recovery of the stricken area of ​​the Indian Ocean tsunami, it is not clear here, but there were many similar trends.
Let’s return to the example of Haiti. Examination of the population growth rate in Haiti (Port-au-Prince) showed that it was overgrowing until the disaster occurred. Haiti’s revival should be relatively quick, given the population index alone. However, it is also possible that Haiti has an entirely different social situation that cannot be applied in the above example. You may have to think that Haiti’s revival will be heavily influenced by the very elusive variables of political steering and social conditions. There is an article in the magazine “ Economist ” that fears that similar problems may occur in Haiti, such as the problem of contributions and aid in the Indian Ocean cases where oversupply was unevenly distributed, and the damage was widened.
What do you think of Haiti’s recovery?

P.S.
The data below indicates a lot about the theory.

1) It was very inconvenient for them to settle the areas which were far from the sea because they were mainly fishermen or living their daily lives by the sea.

2) Most of them were doing small size fishing related businesses, had not enough budgets to relocate.

3) There were difficulties to attain the agreements to do relocations among the community members.

4) They, community members, had conflicts with land owners to select and purchase the relocation lands.

5) There were technical limitations to create a land for living on the slope because Japan did not have enough technological level at that time.

They mainly relocated to higher grounds by their own decisions. However, some groups gave pressures on the people who had planned to move and tried to let them give up to do so because they would like to maintain the communities to recover.

A small number of the communities moved to higher grounds, however, some went back to their original places. In addition, their relatives or other village people started to live there. Some families positively accepted the immigrants from outsides to maintain their ownerships.

Finally, almost all communities had chosen to rebuild at the same places, so the risks were retained and this combined with the fact that they were re-affected by the 1933 Showa sanriku tsunami disaster.

Concerning after the 1933 Showa sanriku tsunami, this will be explained later.

Figure 1 Tsunami disasters in Sanriku ria coast (Cabinet office of Japan)
The Meiji sanriku tsunami in 1896 was the worst tsunami disaster ever in Japanese recorded history. The Showa sanriku tsunami in 1933 occurred in the midnight, however, they evacuated well because of the Meiji’s experience. As mentioned before, they always needed to choose relocations or rebuildings with the consideration of their resources after the tsunami disasters.
The decisions of each community can be seen in Table 1 (Tentative).
Table 1 Relocations or Rebuilding History of Communities after the Tsunami Disasters(Tentative Table: very rough translation, sorry. Will change soon)
Ref. ( Nakasu,Tanaka, Miyake, 2011) 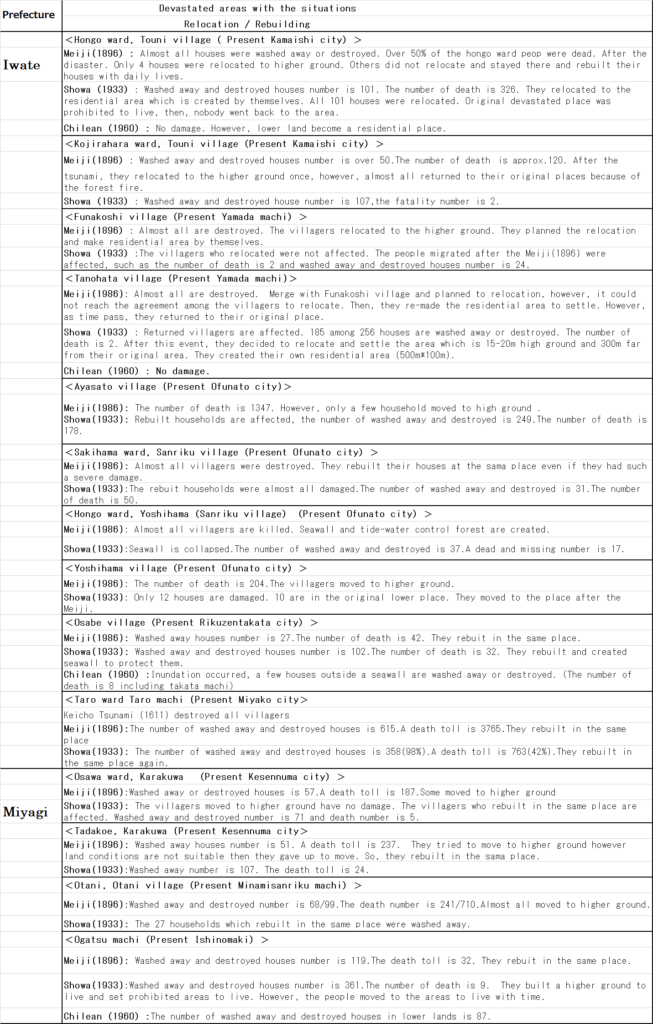 Some communities relocated to higher grounds after the tsunamis, however, they tended to go back to the original places because of their daily life’s convenience. They are mostly fishermen or making their living by the sea. We can imagine how difficult for them to live in the ground, far from the sea.
To be continued.