Past columns will be updated both in Japanese and English.

My past Japanese writings for an internet newspaper company and the research map researcher’s blog (Japan Science and Technology Agency’s site) can be checked in the followings, but the article of the news comany is not free also is not in English, in Japanese. Concerning hydrological, meteorological, and climatological disasters, heavy rain, and storm disasters are caused by a low  pressure in the Iceland area developed in a winter season. A cold atmospheric current coming from Arctic gain a warmer vapor stream from the Gulf Stream and develop the strong atmospheric depression in the area. This causes the strong winds and high tidal waves along the coastal areas of the North Sea. Netherlands and England can be highlighted. Netherlands had storm surges in 1530 and 1570. The death toll were approximately 400,000(1530) and 70,000(1570) for each. The 1953 depression made 1800 death toll. This disaster reached to England also. England’s disasters were the 1703 Thames river flood and the 2003 Heatwave. The temperature was 8-10 over than an average year on August 2003 (Day_38).

Danube, Elbe, Rhine, and Seine rivers are on the gentle slope make slow inundations caused by heavy rains. On August 2002, the Central Europe had a heavy rain, this makes Danube and Elbe rivers overflows in Germany, Czech, Austria, and Hungary. The death toll is approximately 100, affected is over 100,000. Historical Buildings in the city such as Prague,Dresden, and so on along the rivers were also inundated.

Alps mountains have had landslides, debris flows, slope failures, and so on. The particular example is the landslide in Dolomites, North Italy in 1963. Overflows from Vajont dam caused by large-scale landslide attacked the village in downstream ares.The death toll is approximately 2600.

An Interviews based explanation

In summer 2010, Russia had a heat wave and this makes wildfire. The wildfire was spread out and it took over 1.5 months to extinguish.Many villages were destroyed by the fire. The Moscow was covered by harmful smoke. Over 55,000 were killed by the heat wave and the smoke in Russia.

The Shigeto ward, Tosayamada town in Kochi prefecture had a huge landslide disaster on the 5th of July in 1972. We call it Shigeto Landslide.

What we can learn from this landslide is the secondary disaster.

Second, a huge landslide happened at 10:55 am during their tasks and killed 59 among them. In addition, the landslide pushed the train stayed at Shigeto station away. 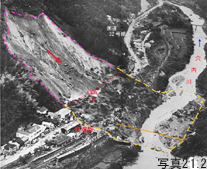