Continue to the past New Orleans Interview Records, I would like to open the memo about the interview to PTWC. It was a great time and I learned a lot from the interviews.  So I would like to share the fact to let you know their works to tackle the tsunami disasters in the world.

PTWC is the core center for the tsunami warning well known to the world.

The records from the interview survey are shown below. 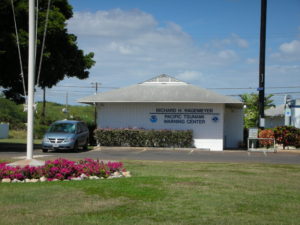 ■ Evacuation
There is no international standard in terminology. Terminology varies by country/region. The words sometimes make me confused. Also, in the past, it was two either evacuation nor no evacuation.

■ Warning Error
It is challenging to give a warning. There are errors in the original earthquake and the tide data. There is an error in the gauge also.
To judge them collect is too hard. So, it can be said that 99.99% is an error.

In Hawaii, only a quarter of evacuation was actually damaged in the past. It is not unusual that although there were evacuations, there were no damages at all.

■ Past data and warning judgment
Only use a few. Because how to put out the past data, equipment, etc.are hard to do. Which way is the numerical model used to determine if the earthquake becomes a tsunami is complicated. There are more things to do.

■ Relationship with other countries
The countries that are most focused on warning about tsunami in the Pacific are Japan, America, Australia, Chile, Canada, and Russia. Also, it is not possible to evaluate the inspection records of other countries. This should be noted.

■ At the time of the 2004 tsunami
Most of the records before the Indian Ocean Tsunami were reported hourly, so judge the event was tough. Every 15 minutes, now every 6 minutes is normal and very good.

■ Conditions for cancellation
Make a comprehensive decision. The problem of reflections adds to the complexity. Not only direct waves but also an indirect wave should be considered.

Tsunami is the words coming from Japan