CNN: (October 30)A powerful 6.6-magnitude earthquake rocked central Italy on Sunday morning, injuring at least 20 people, in the strongest tremor to hit the country in more than three decades. The earthquake follows tremors last week and comes on the heels of a devastating quake in August, which killed nearly 300 people and flattened entire villages.

Asian Disaster Reduction Center (ADRC) still does not list this earthquake situation.This earthquake is severer than this August Earthquake(Day_107). Earthquakes in Italy happened mostly central and southern part of Italy around the

Natural disaster trends are usually from human sufferings to economic damage. In Italy, main natural disaster is the earthquake and follow the trends as you can confirm below.
However, recent earthquake disasters in Italy are so severe.  With this August earthquake, the number of casualties would be over 550. The disaster recovery is also the issue. As mentioned in Day_107, “Italy has a poor record of rebuilding after quakes. About 8,300 people who were forced to leave their houses after a deadly earthquake in L’Aquila in 2009 are still living in temporary accommodation(Reuters).” 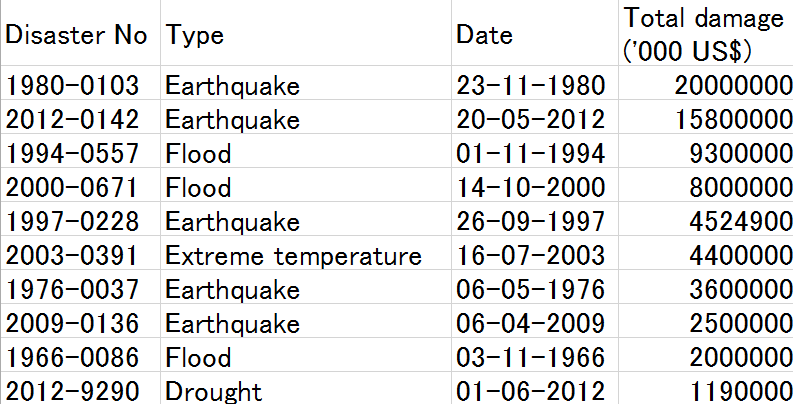