There were three inquiries to ponder as follows:
1) Why were so many foreign companies coming and making supply chains?
2) What kinds of damage types could be analyzed and how about the influences?
3) How did companies respond?

Concerning the 1) Why were so many foreign companies, especially Japanese companies coming and making supply chains? There are reasons from Thailand and Japan sides. The first, Thai national government tried to de-centralize to narrow the gaps between Bangkok and other regions because so many things concentrated in Bangkok. To do this, establishing industrial estates and parks is the one of the effective ways to mobilize the people, things, and investments from Bangkok to the regions. The national government also had set some tax incentives to motivate foreign companies to come. Thailand is the very nice place for Japanese to stay because of the education systems, medical services, abundant labor force, people’s character, safety, and so on. The second, Japan had faced the problems of the rising yen after the Plaza agreement in 1985. Big companies, especially manufacturers, which had international businesses decided to move to Thailand to produce their products. After the bankruptcy of Lehman Brothers in 2008, the world economic climate became worse and the yen’s price was getting higher and higher again. Small companies, this time, could not endure the situations and moved to Thailand to deal with the big companies which already transferred in Thailand. Again, the attached graph (Figure 4) indicates so many Japanese companies came these areas after 1985, the year of the Plaza Agreement.  A number of  the JCC (The Japanese Chamber of Commerce) BKK member reflects the situations. 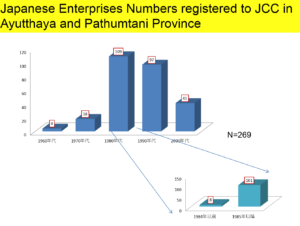