The following slide indicates the Great East Japan Earthquake and Tsunami(GEJET)disaster’s data by each municipality (IRDR conference).You can see the fact that Sanriku ria coast has more severe damage compared to the population of the municipalities.We also need to notice the Sanriku ria coast has a long history of tsunami disasters.But why did they have a sever damage again? 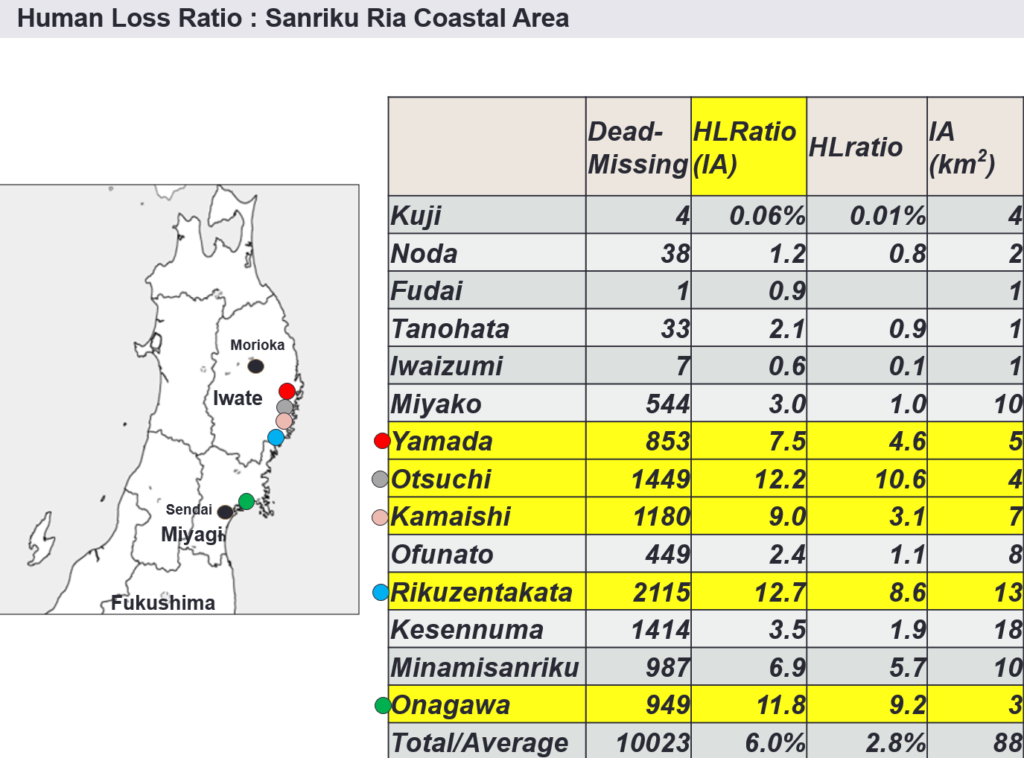 The Sanriku areas have a special geographical condition mentioned as Sanriku ria coast. The coast has mountains close to the sea, so residential areas are limited only in the distributed, narrow and lower zones near to the sea and the areas become very vulnerable against the tsunamis. The bays in the coast are small and the sea inside the bays are very deep. This makes tsunami faster and higher, this is why the Sanriku ria coast makes the one of the highest tsunami risk areas in the world.

See the below “Relocation or Rebuilding (1)”

The following is the brief explanations of each tsunami disaster. The Figure 2 (Figure 1 of the Day_94 post) does not include the Chilean Tsunami.

Figure 2  The Tsunami Disasters in Tohoku (Cabinet office of Japan)

2) Showa sanriku tsunami disaster(1933), this tsunami disaster can be examined the lessons learned from Meiji (1933) mitigate the impacts. This tsunami attacked mainly the Sanriku ria coast at approx. 2:30 am, 3rd of March in 1933. Even if the midnight, the residents evacuated so quickly because of their memories of the Meiji (1896) with strong earthquake (Japanese scale is Shindo 5.5). The max. tsunami height is 23m at the same place, Ayasato area, with Meiji (1896). The first wave arrival is approx.30 min. after the earthquake.

3) Chilean tsunami disaster(1960), this is caused by the tsunami generated offshore in the long distance. This is coming from Chile in South America. The earthquake occurred in Chile was magnitude 9.5 and this huge earthquake generates tsunami and reach to Japan after 22 hrs and a half. The tsunami come approx. at 3 am, 23rd of March in 1960. The death number is 139 all over the Japan and Sanriku ria coast is the worst such as 63 in Ofunato, 37 in Shizugawa (present Minamisanriku), and 8 in Rikuzentakata.

4) Great East Japan Earthquake and Tsunami(GEJET) disaster(2011), this disaster is the deadliest disaster after the Second World War in Japan. The earthquake happened at 2:46 pm, 11st of March in 2011. The total casualty number is 19,846 based on the EM-DAT.The max.tsunami height is 40m at the Sanriku ria coast. The first wave arrival is approx. 30 min. after the earthquake.